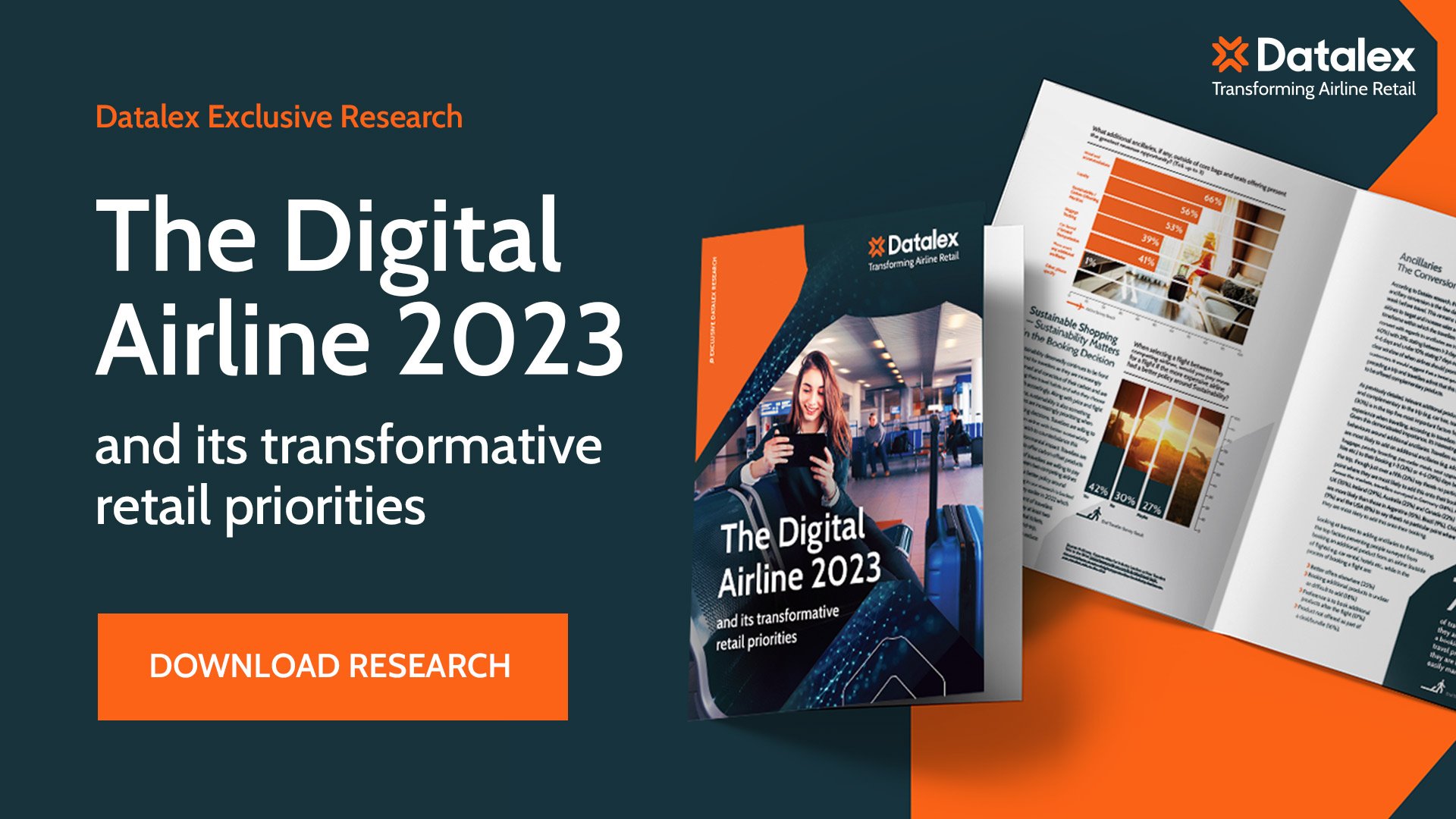 Latest research from Datalex reveals travellers are seeking retail modernisation across the board including better product bundling, transparent pricing, new payment methods such as Buy Now Pay Later and loyalty redemption, as well as alternative ancillaries such as carbon off set initiatives. Airlines are signalling an urgency to break free from legacy technology that restricts the speed with which they can bring retail modernisation to their customers, including an imminent move away from the decades old ‘PSS’ technology and increased investment in AI.

The extensive research outlines key retail technology investment priorities for airlines, including an imminent plan to move away from their legacy systems that constrain the digital experience for customers, increased investment in AI and greater control over distribution by investing more in NDC. The research also outlines the retail modernisation that travellers are looking for which includes greater product and payment choice, seamless booking and clarity with regards to price, offers and communications.

A key finding is a ‘digitisation gap’, highlighting an expectation disparity between airlines and their customers.  Just 1 in 9 (11%) of the 10,000 end-travellers surveyed believe airlines are ahead of other e-commerce providers like fashion brands and other online retailers in terms of modern online retail, suggesting they do not view airlines as particularly innovative. However, on the other side of the coin, almost a quarter (24%) of airline executives believe they are ahead of other e-commerce websites, 17% believe that they are at least on-par, and just 16% think they are behind. These findings indicate that airline executives are underestimating the reality of the perception gap that exists between them and their customers.

Additionally, travellers are seeking out clearly communicated and clearly priced offers and ancillaries to add to their flight bookings, with 70% of travellers more likely to purchase if several products are bundled together. The benefits of bundling are seen on the airline and the customer side, with bundling more appealing to customers as it makes their experience more seamless, and simultaneously airlines benefit from accessing a greater share of the customer’s wallet. Loyalty and payment innovation are high on the agenda for travellers with 75% of travellers surveyed most likely to prioritise the use of loyalty points as a payment method for travel, while over half (53%) are likely to use Buy Now Pay Later (or similar) payment methods, and almost half (48%) are likely to use Apple Pay.

Interestingly, just over one third (34%) of those surveyed indicated that they would likely use cryptocurrency as a method of payment for travel, perhaps signalling the extent to which traditional payment methods like credit cards may be disrupted in the coming years. Respondents based in the US were most likely to indicate an interest in using cryptocurrency as a payment method (73%) followed by Brazil (57%) and Argentina (50%).

Travellers are also more aware of their carbon footprint than ever before, expecting airlines to provide carbon off set ancillaries, with a significant percentage (42%) of the travellers surveyed willing to pay more for a flight with an airline with better sustainability credentials.

To achieve the retail modernisation expectations of their customers, the airlines surveyed have indicated plans to kick-start the initial shift away from the PSS in the next 1-2 years to realise the future of ‘unified offers and orders’. Loyalty programs remain a top priority for airlines with 63% of airline executives noting that loyalty initiatives and their associated value have increased in their estimations over the last 12 months. And an overwhelming 93% of airline executives surveyed said that AI-powered pricing has or should have a role in their airline.

Commenting on the research, Bryan Porter, Chief Revenue Officer at Datalex said “It’s clear that 2023 represents a unique inflection point for the airline industry, as it is purported to be the first ‘normal’ year post COVID. Within this renewed opportunity and environment, airlines can move from survival mode to now focusing on travel retailing optimisations. Our research clearly signals the need and urgency for increased digital investment, demonstrates a more progressive airline mindset poised for innovation and a traveller profile eagerly awaiting the retail modernisation coming down the line.”

Also commenting on the research, Conor O’Sullivan, Chief Product Officer at Datalex said “Results outlined in this research very much support the key themes underpinning our product roadmap, such as the role of AI to power real-time pricing with 69% of airline surveyed believing that AI has or should have a role in the enhancement of current revenue management processes. The increased investment in NDC and also plans to move away from legacy technology. These are initiatives we are laser focused on in our product and technology strategy for 2023 and beyond.”

The research was conducted in late November 2022 by an independent, international research agency Censuswide.

A full copy of the research report can be downloaded here.

Datalex Announces 'Great Place to Work Ireland' Certification 2023
Datalex is delighted to announce that we have officially been certified as a 'Great Place to Work' for the third year running, after a thorough and independent analysis conducted by the Great Place...
Read More
Datalex Research Reveals Top Traveller Trends for 2023
2022 was a significant year for the travel industry, as it marked the beginning of a gradual return to normality after an extremely challenging and uncertain two years. By the end of 2022, airline...
Read More
Datalex Research Highlights a 'Digitisation Gap' and an Urgency for Real Retail Transformation
Latest research from Datalex reveals travellers are seeking retail modernisation across the board including better product bundling, transparent pricing, new payment methods such as Buy Now Pay Later...
Read More