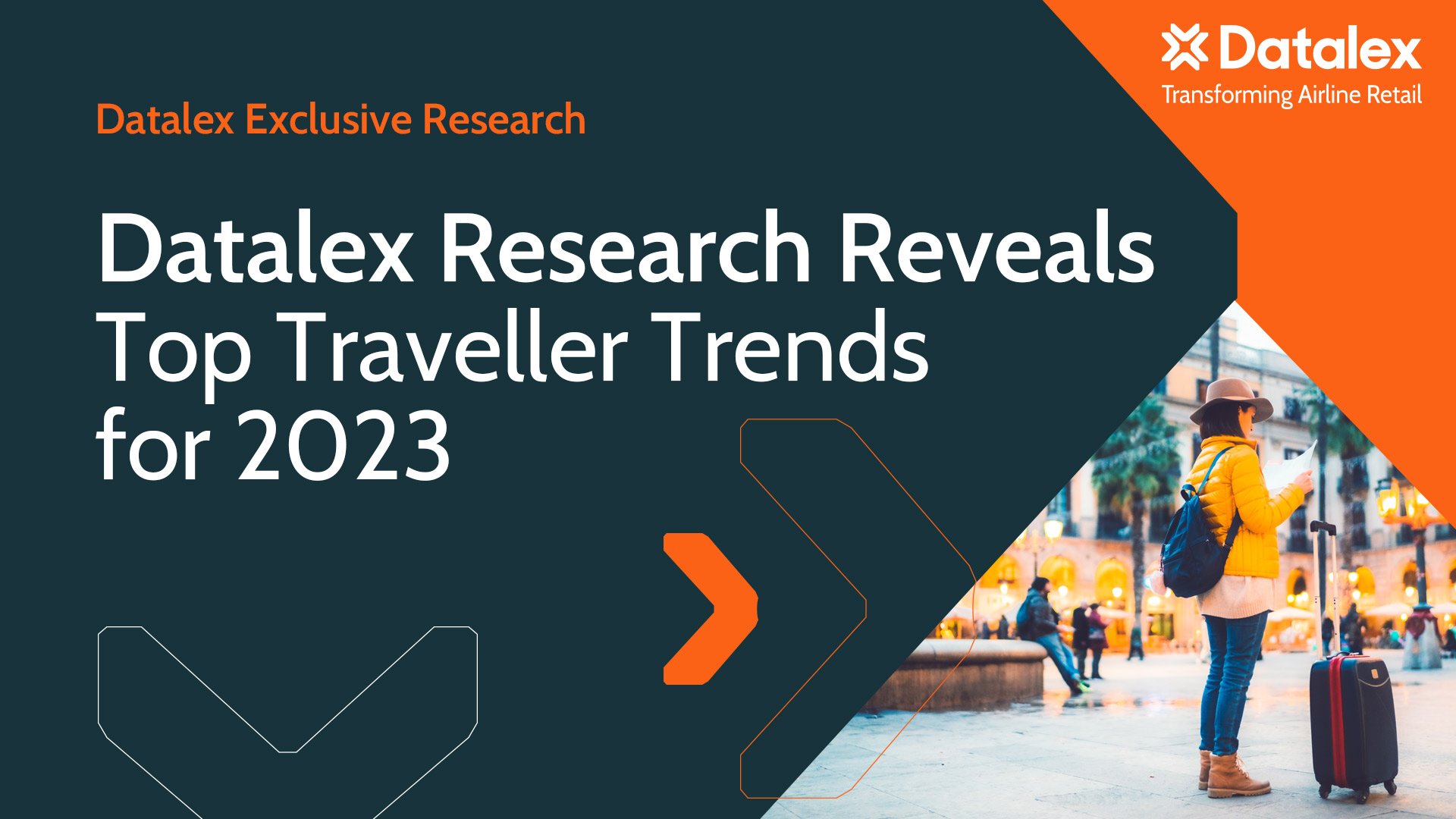 2022 was a significant year for the travel industry, as it marked the beginning of a gradual return to normality after an extremely challenging and uncertain two years. By the end of 2022, airline traffic was almost back at 2019 levels with European traffic at pre-pandemic levels (91%), according to Eurocontrol. This progress was despite a year marred by inflation, the cost-of-living crisis, dire geopolitical issues, and continued restrictions on the Asian market.

Against this backdrop Datalex commissioned extensive research in late November 2022, sourced from a global survey of 150+ senior airline executives (which included 50+ airline CEOs) and over 10,000 global travellers. Datalex’s latest research shows that key trends shaping airline thinking are indicative of a broader shift towards greater control, freedom, and autonomy with regards to distribution and technology within the airline organisation.


Travellers are seeking out clearly communicated and clearly priced offers and ancillaries to add to their flight bookings, with 70% of travellers more likely to purchase if several products are bundled together. The benefits of bundling are seen on the airline and the customer side, with bundling more appealing to customers as it makes their experience more seamless, and simultaneously airlines benefit from accessing a greater share of the customer’s wallet.

3. Shift away from the PSS is imminent


A technical ecosystem that is architected for the future and is foundational to a unified offer and order future, is much closer than we think. Strong willingness to move sooner rather than later away from the PSS; in the next 1-2 years. While this timeline seems ambitious, it signals a clear and very strong appetite to kickstart this transition to accommodate a new era of airline retailing.

4. Airlines are now in control of their ‘distribution destiny’


The measure of distribution success is set to be redefined, beyond simple cost-saving towards total optimisation of indirect channels. With channel contribution the ‘new KPI’ instead of cost-saving, airlines can be truly in control of their ‘distribution destiny.’ Airline executives are viewing their distribution strategies more holistically, increasingly looking beyond just cost-saving towards revenue-generating as part of its overall business objectives.


Card has steadily replaced cash as the king of payments in recent years but Datalex’s research points to new frontrunners, with payments being the final frontier in the airline industry. Traditional digital transactions on credit or debit cards are no longer leading the way in the payment’s world, with newer methods of payment overtaking traditional methods at a significant pace, such as loyalty points payment which was favoured by 75% of travellers. Airlines recognise the demand and the opportunity in loyalty programs and are investing more in this area too.


Mirroring results from Datalex research 12 months ago, AI-powered pricing is a top priority for airlines, and AI-powered pricing is now overwhelmingly seen as an enhancement to Revenue Management, not a replacement. There is notably greater trust in AI across organisations when the airline has a degree of control and clarity of the AI-powered decision-making.

7. AI as a collaborator through a partner


Airlines are clear in the view that the role of AI in pricing is to enhance Revenue Management, not replace – and the research suggests this is overwhelmingly so. Airlines surveyed cited challenges including applying AI across existing systems and lack of experience and expertise which indicated a tangible need to partner with specialist providers.

8. Trust must be earned, not bought


A telling insight found that travellers who travel more are actually more likely to anticipate lack of digital support or self-service as impacting their travel plans. Two thirds (66%) of respondents who travel more than three times a year are concerned that lack of digital self-service/online support may affect their travel plans/travel experience in 2023, compared to over half (52%) of those who travel two times a year who said the same. A significant barrier to trust therefore exists for airlines to overcome with respect to their more regular customers, indicating that trust has to be earned by more frequent digital support.

It’s clear that 2023 represents a unique inflection point for the industry, as it is purported to be the first ‘normal’ year post COVID and within this renewed opportunity and environment, airlines can move from survival mode to now focusing on travel retailing optimisations.

Datalex Announces 'Great Place to Work Ireland' Certification 2023
Datalex is delighted to announce that we have officially been certified as a 'Great Place to Work' for the third year running, after a thorough and independent analysis conducted by the Great Place...
Read More
Datalex Research Reveals Top Traveller Trends for 2023
2022 was a significant year for the travel industry, as it marked the beginning of a gradual return to normality after an extremely challenging and uncertain two years. By the end of 2022, airline...
Read More
Datalex Research Highlights a 'Digitisation Gap' and an Urgency for Real Retail Transformation
Latest research from Datalex reveals travellers are seeking retail modernisation across the board including better product bundling, transparent pricing, new payment methods such as Buy Now Pay Later...
Read More